Flooding leads to rescues in Louisiana and Texas

Water rescues took place Tuesday in Louisiana’s capital region after torrential rain that starteda day earlier caused dangerous flash flooding in parts of that state and southeastern Texas.More rain is expected through Thursday in the south-central US, setting up moderate risks of further flooding in central Texas, southern Louisiana and parts of southern Oklahoma and Arkansas.Tuesday night brought tornado watches for parts of Texas where almost 6 million people live. Several counties where radars indicated tornado rotation were under warnings.

In southeastern Baton Rouge, rescuers were using boats to ferry people from apartment buildings and other structures surrounded by high water late Monday and early Tuesday, CNN affiliate WAFB reported.More than 250 people have been evacuated and brought to higher ground in East Baton Rouge Parish, and no injuries have been reported, parish fire department spokesperson Curt Monte told CNN earlier.”We have buses running to carry those who have nowhere to go to the airport, where we have a reception center set up to assess their needs,” Monte said.Parish Mayor-President Sharon Weston Broome declared an emergency after 13 inches of rain fell and there was more to come. More than 16,000 residents were without power during the peak of storms, she said.Floodwaters came into parish businesses. About 3 feet of water collected in Kirks Tires and Accessories, just outside Baton Rouge, employee Carl Napoli told WAFB. Cardboard boxes floated in murky water that surrounded stacks of tires, video showed.”Products, a lot of them can’t be resold once they’re wet, and everything’s gotten wet from 3 foot and below,” Napoli told the station.More than 50 roadways in East Baton Rouge Parish were impassable and emergency crews received more than 160 calls for help, parish spokesperson Mark Armstrong told CNN.Numerous stranded cars were reported in the parish, the National Weather Service’s office in New Orleans said.In southeastern Texas’ Jefferson County, high water seeped into homes Monday in the Fannett area southwest of Beaumont after more than 1 foot of rain there, CNN affiliate KBTV reported.Sheriff’s deputies guided boats across floodwater covering streets, fields and yards, reaching homes and helping surrounded residents get to dry ground, video from KBTV showed.This week’s flooding comes as scientists have warned that climate change is leading to more extreme rainfall events that lead to flash flooding.

Lake Charles floods as it rebuilds from 2 hurricanes

Lake Charles, a city of about 75,000 people, got some of the worst of Monday’s rain — more than 12 inches fell, including about 6 inches in two hours.City residents still are rebuilding from wind and flooding damage caused by two hurricanes — Laura in August and Delta in October — and an ice storm over the past year.”We just can’t catch a break,” Dick Gremillion, Calcasieu Parish’s homeland security director, told CNN. “It remains to be seen, but we still see a lot of blue roofs around where people have not replaced their roofs, so a heavy rain event like this is devastating for those people who haven’t gotten their roofs repaired yet.”For Lake Charles resident Derek Williams, the water rose so quickly Monday that it only took 45 minutes for a car parked on the street to be submerged. It was the car of a neighbor’s friend, who was safe, he told CNN.”The only time it’s flooded like this in the last little while was during Hurricane Delta,” Williams said. “And even then it took all day to get this high.” 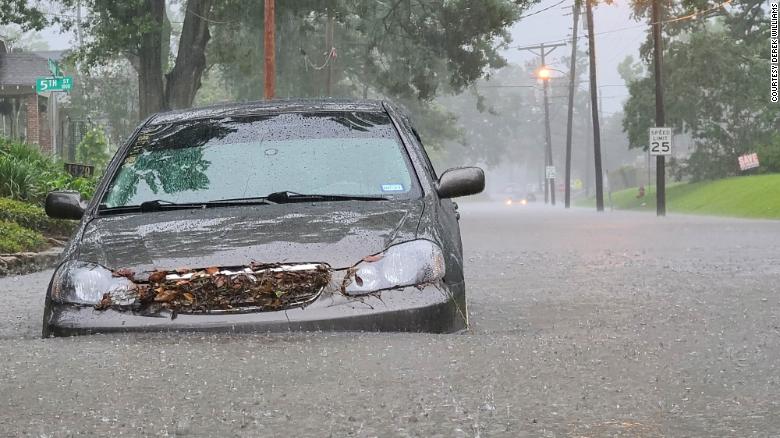 This car was submerged within 45 minutes, Lake Charles resident Derek Williams said.Another resident, Lamar Pitre, had over a foot and a half of water in his house due to flooding, he told CNN. He took video of the water and posted it on Instagram, saying, “Here we go again.””It last flooded for Hurricane Delta late last year,” he told CNN. “The rain started around 4 a.m. When the water started getting high, I ran outside to reuse some of the sandbags I had from those hurricanes.”The mayor said 400-500 homes were lost, more than in the hurricanes. “So even though yesterday was not technically a hurricane, the effects were significant on the city,” Lake Charles Mayor Nic Hunter said.

More than 100 calls for rescue in Lake Charles

More than 100 rescue calls were made in Lake Charles on Monday, Gremillion said.”We have people stranded around the area who are stuck in high water,” he said. “They’re not necessarily in any danger, but they can’t get from where they are to home, or to work, or wherever they’re trying to get to.”Most of the calls are believed to be welfare checks to evacuate residents, but earlier in the day, at the height of the rainfall, rescuers helped people from vehicles that ventured too far into the water, Gremillion said.Nearly half the roads in the parish were under some water, Gremillion said. “We have floodwaters in places that we’ve never seen flooding before,” he said.Monday brought the city’s third-highest rainfall total on record. The highest on record was 15.79 inches, on June 19, 1947. Second highest was 15.67 inches, on May 16, 1980.

Extreme rainfall and increased rainfall rates are closely linked with warming temperatures and the climate crisis. “The frequency and intensity of heavy precipitation events across the United States have increased … and are expected to continue to increase over the coming century,” according to the US National Climate Assessment in 2018.This is leading to more 1-in-5-, 1-in-10-, 1-in-100-year-type extreme rainfall events that lead to catastrophic flash flooding.These trends are consistent, according to scientists, with what is expected in a warming world, as warmer temperatures cause more evaporation which leads to higher levels of water vapor in the atmosphere, which can in turn lead to more frequent and more intense rainfall.Louisiana has experienced extreme, climate-fueled rainfall before with disastrous consequences, such as in 2016 when deadly flash floods were studied by scientists and found to have been made at least 40% more likely and 12% to 35% more intense because of human greenhouse gas emissions.